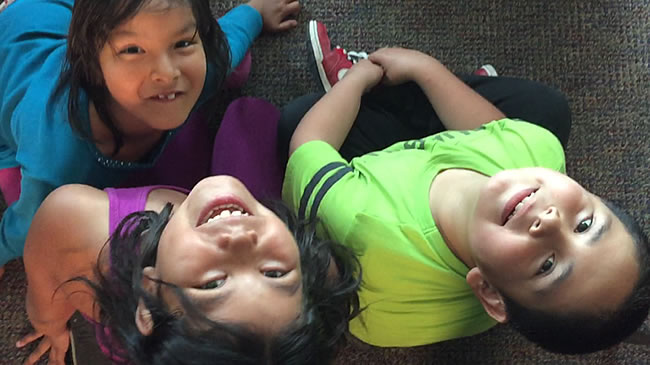 North America is one of the most complex linguistic regions in the world. There are approximately 60 indigenous languages spoken in Canada and these languages fall into 11 separate families. In a few cases the Aboriginal language families of Canada and the rest of North America have been found to be distantly related but have morphed over time. As a result, if you are fluent in one language (Mi’kmaw for example) you may understand some words in another language, such as Ojibwe. Many of the languages are spoken in several dialects. For example, Ojibwe has seven dialectical variants found in many communities throughout central Canada.

Canada's first inhabitants spoke some sixty different languages (over 100 if one counts major dialects), half of which were spoken only in British Columbia. The languages stemmed from 11 linguistic families, primarily Iroquoian, Algonquian, Na-Dene and Eskimo-Aleut.

The most widely used languages would have been Cree and Ojibwe in the Algonquian family, Mohawk and Wyandot (Huron) in the Iroquoian family, Inuktitut and Yupik in the Eskimo-Aleut family, and Haida and Slavey in the Na-Dene family. The region with the greatest number of languages was the area known today as British Columbia.

According to the first Europeans, especially the missionaries, the Huron in Wendake (on the shores of what is today Lake Huron), maintained trade and diplomatic ties with more than fifty nations. The Huron language (or Wyandot) was considered the vehicular language that all the neighbouring nations had to speak to some degree in order to trade with the Huron.

Canada's first inhabitants didn't know how to write and therefore did not leave any written documents—usually the primary source of information for historians. Within each nation, the culture, know-how, customs, and legends of the people were traditionally handed down orally.

According to the 2011 National Household Survey (NHS) 240,815 Aboriginal people, or 17.2% of the identified Aboriginal population, reported an ability to converse in an Aboriginal language. This compares with 21% according to a 2006 Census. That drop in almost 4% over 5 years is indicative of the direction that native language is headed – steadily downward. 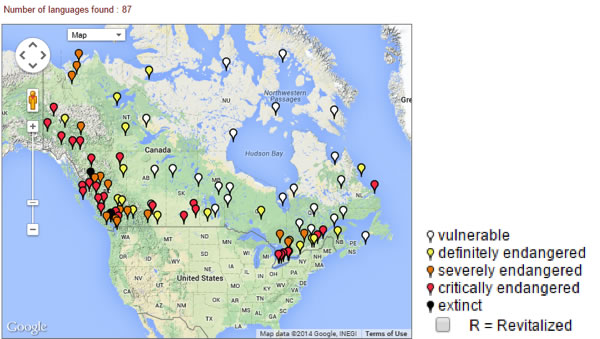 A language becomes extinct when its speakers disappear and this is most often caused by external forces such as military, economic, religious, cultural, educational subjugation, migration or urbanization. It could also be caused by internal forces such as a community’s negative attitude towards its own language.

Importance to Language and Culture

Language enables the transference of culture and cultural knowledge across generations. A child’s first language is critical to his or her identity. Maintaining this language helps the child to value his or her culture and heritage, which contributes to a positive self-concept. Efforts by Aboriginal groups to preserve and promote their culture are associated with dramatic reductions in rates of youth suicide.

Languages are embedded with knowledge and information about culture, place, history, spiritual beliefs, and they frame people’s ways of seeing and understanding the world. Loss of language can result in important links to community being lost.

Language serves as the primary cultural tool and medium for transmitting meaning and concepts. Patterns of social interactions are transmitted from one generation to the next through language. The need to introduce language at a very young age and then reinforce it during adolescence helps native children to embrace their identity. Students who continue to develop their native language have higher academic achievement in later years than do students who learn English at the expense of their first language.

There is a growing interest in Native Language revitalization across the country and therefore more technologies are being developed to facilitate this. We would encourage all those in their efforts as long as they remain committed to providing services and tools that people will actually use. Hundreds of hours of video with native speakers but no context will not help new language learners.

SayITFirst has focused on producing educational tools, instructional materials and digital translators to ensure that certain native languages are continuing to be taught and preserved. Every effort is made to ensure these tools reflect Indigenous ways of learning to increase chances of success.