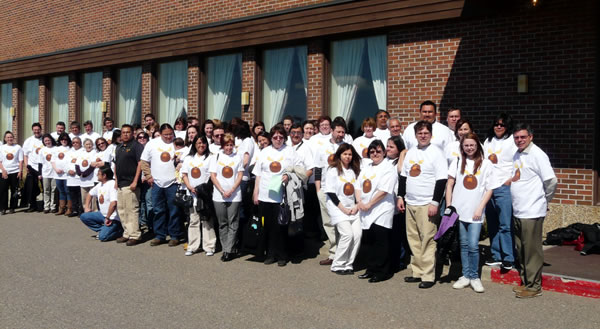 SayITFirst has been helping groups and individuals in the acquisition of the Mi'Kmaw and Maliseet languages. Over the years, individuals and communities include:

In 2010, Mike’s reputation for working with Aboriginal Languages with a team at Microsoft brought him to the attention of the Minister of Education for the New Brunswick provincial government. Mike was approached to see what could be done to work with the Indigenous Perspectives Native group on language revitalization.

In keeping with the belief that consultation is a critical component to success, Mike met with the Union of New Brunswick Indians (UNBI), a group made up of provincial chiefs. Mike’s intention at this early stage was simply to engage in conversation and ‘see what he could see’. While initially there was some resistance, it soon became apparent that having someone from outside the community would be an advantage and bring new perspectives. Once the Chiefs saw Mike’s passion, they bought into the idea and Mike set to work.

The first objective was to develop an online dictionary for the Maliseet and Mi’Kmaw languages. Mike worked with local resources and built relationships with the Elder community to assist in compiling words and phrases for the dictionary. The goal was 2000 words for each language. The overall strategy wasn’t to save the language so much as it was to show that this was a grass roots project and that there was a will and commitment from within the Native community to preserve the languages. The project began to thrive and they soon surpassed the initial goal.

First Nation Education Initiative Inc. (F.N.E.I.I.) contracted SayITFirst to produce a language revitalization strategy for the FNEII communities to execute. They didn’t want to wait, knowing full well the language was balancing at the edge of a steep cliff. A Whitepaper was produced and the project is following as many of the principles as can be funded.

An Ombudsman report stated that 78% of Native People in New Brunswick thought it was ‘somewhat’ or ‘very important’ to learn the language. Until this SayITFirst program, they weren’t sure where to start. Now they have taken ownership for the language and are seeing increased interest and engagement within the community.  Mike has seen first-hand how this has affected Elders within the Native community.  When he read the phonetic version of the words out loud, the Elders laughed because they hadn’t heard some of the words spoken in over 70 years.

It became evident during this process that there was a need for tools if the strategy was going to achieve its goal of language fluency. As funding became available, Mike and his team began developing books and producing Children’s shows. Key to developing the Native language children’s books is a phonetic technique developed by linguist, Veronica Atwin. This ensured that the children’s books contain not only the Native phrases and an English translation, but also a third phonetic interpretation pronunciations and teach themselves the language at the same time.

Creating these materials was possible through the efforts of the First Nation Education Initiative Inc. (FNEII), their Executive Director, Bob Atwin and the Education Counsellors from every First Nation that make up the FNEII Board. To apply for future grants from Heritage Canada, the community needed to make the language project a priority and agreed unanimously to share additional costs not covered by the grant.