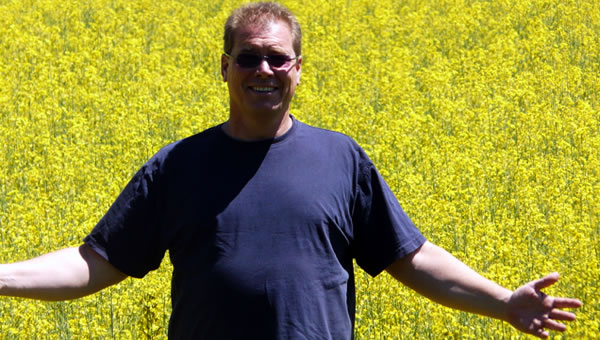 I was presenting once at a language conference in Memramcook, New Brunswick. As I was saying, "Hi my name is Mike Parkhill," a lady put up her hand to ask me if I was Native. I said, "No." She declared, "With all of the great things Native educators are doing, why do we need to listen to a White guy talking about our language." A dozen people got up and left.

I was put off a bit but continued. "As I was saying, my name is Mike Parkhill." Another hand went up and I was asked if I was giving anything away for free. I said, "No." Another dozen or so people got up and left.

I had to regroup my thoughts. I announced that I represented diversity. My experience in the corporate world taught me diversity is synonymous with Women's equal rights for fair pay and equal opportunity. In my new world it represents people with different backgrounds approaching the same problem from a variety of different viewpoints and past experiences. This is why 'The White guy' is working with Native languages. I cannot fully understand the grounding in place and time, nor can I completely embrace the connection, with the Creator. I can, however, apply an education systems and technology approach to the language revitalisation effort. In my years at Microsoft, I fully understood my special purpose in the corporate world, that purpose being my ability to see anomalies - things that didn't fit. Then, I would fix them. From this approach, that I bring to the effort to reclaim the language, I was able to see things those immersed in the revitalisation effort were unable to see because they are too close and they did not have my background. Coming from ground zero, my mind needed to be open to all information without a filter. I didn't know what I didn't know.

I was able to see excellent examples of material created for use in the band operated schools, however, I quickly noticed the material produced was hand created, photocopied or cut out of magazines. All of the effort I was able to witness was non-digital. In a classroom in New Brunswick, I ran into a teacher who had hand produced material over her tenure of over thirty years. I asked what would happen if a fire hit the school. She exclaimed with a smile, "No problem, the sprinkler system would kick in and douse the fire."

"Would the water damage your material?" was the question posed right before she went white and blurted, "My God, everything would be lost, thirty years of hard work would get wrecked." I instantly discovered the lack of digitized material. Soon after I coined the phrase ‘Indigitization’ - digitizing Indigenous material.

The next day I was in Burnt Church First Nation and recanted the story to the teachers there. They told me they had recently had a fire and this is exactly what happened there.

In touring these schools, I also saw that there were virtually no Native Language books. Because of the dearth of learning materials in a school setting, I quickly understood that reading a book to your child, the activity I always took for granted, did not occur for our Native children. I saw first hand proof that the average Native language teacher spends 2.3 hours more than those teaching in English or French, in order to create their own content from scratch. Wouldn't their time be better spent transferring the language orally and sharing Indigitized content created once and used by all?

The Indigitization effort was born. From this understanding, I have been working for several years now to create books, Children shows and translator tools. Digital content cannot be destroyed. Once produced, all new material is incremental to the old inventory. The biggest benefit is this material can be reproduced and distributed everywhere. We are just starting to understand the power of this thought.

I used to be sensitive about being a White guy, this fact I cannot change. In fact, the teachers and Elders I work with now call me by my nickname - White Pine. I'm tall and I'm white. I no longer shy away from my background because I believe in diversity so much and I have been able to position myself in the Native world as someone with a background most do not have. Surrounded by great people who do not use my ethnic background as an excuse, but rather view it as a unique strength to augment the great work they are already doing, they are able to use this new tool (me) to suit their purpose.

Many times I have been told my greatest strength is that I am not from their communities. I didn't understand this at first but have been able to learn that I can make decisions then walk away. If someone doesn't like what has been done in concert with my Native buddies, then I can take the blame.

The first book produced was controversial in the sense that some communities were divided by different writing styles and dialect. Many Elders and traditionalists believed that language is an oral tradition and should not be written. An Ojibwe Elder approached me to ask if we could do a book together. After it was produced, several hundred copies were produced and handed out at a language conference in Fort Frances, Ontario. Of the hundred or so people in the room, 50 thought the idea was offensive and 50 wanted to buy some for their children and students. By the end of the hour, all but one person was on board that books could be valuable. You see, my Maliseet friend named Bob Atwin had given me permission to use his mom's phonetic style of writing. I used the same process for the Ojibwe version so that anyone, whether they could speak the language or not, would be able to read the children's book in Ojibwe to their children or class. The kids could hear the language, over and over again. Parents could practice the sounds repeatedly. I have not heard an objection to our books ever since.

I believe this outcome is evidence of the value of diversity. My background plus the Elder's knowledge. Because I was from outside, I was able to break tradition for the betterment of the kids. Through working with some clever people, we were able to provide support to the Native community, feeling that it is their right to be able to read a book to their children in their Native language.