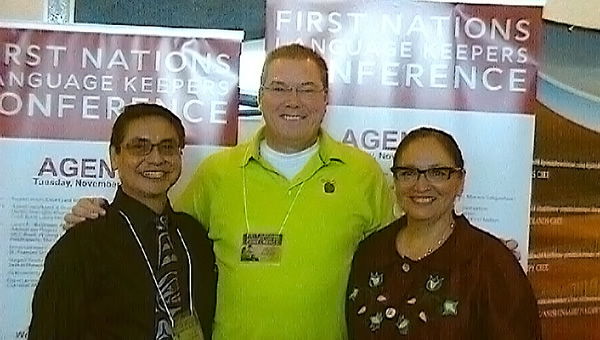 Here we are at the Saskatchewan Indian Cultural Centre's huge event called the First Nations Language Keepers Conference with 350 plus attendees. The hotel is packed with people dedicated to keeping the Native Languages vibrant.

I still do not know the right answer to the problem of which writing style to use in my Cree books. One Elder says write it the way it is learned most easily and the way she uses it with others on Facebook. Darren, being a trained linguist, is saying let's standardize on a pure writing style so all kids in all schools can learn the same way across the province. One short term view, one long term view. They are both right; I'm getting the sense the answer is all about timing. I definitely favour the one writing style approach, but if the books aren't going to be read, then this concept is before its time. Kind of de facto - de jure standard argument. One being adopted widely and one which should be adopted.