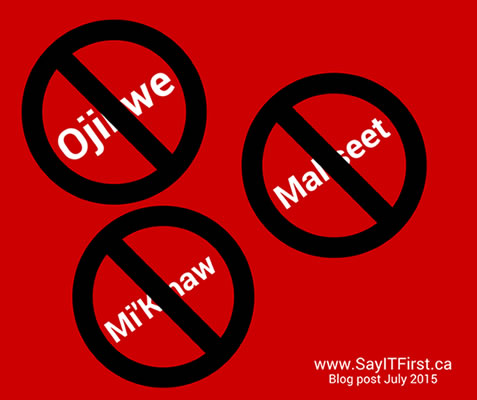 On July 13th The National Post ran an article that was critical of funding for First Nation language preservation. The article and resulting online comments from National Post readers touched a nerve with SayITFirst founder, Mike Parkhill. SayITFirst is working hard to leverage technology and community participation to Modernize, Expand, Revitalize and Localize (MERL) Indigenous languages in Canada. Below is a link to and a copy of the National Post article and Mike’s response.

Although the National Post article is now closed to comment, SayITFirst encourages you to leave comments, but please be respectful of others. We reserve the right to delete content containing insults, profanity, or offensive language. We will also delete any harassment, spam or advertising and will block repeat offenders.

“It's disturbing to see so many Canadians whom I'm sure would have been willing to hang swastikas on flags in front of their houses if living in 1939 Germany. Language is merely an extension of self-identity and has a direct effect on the health and well being of the individual and the community. By erosion of First Nation languages, social ills are propagated. Self-identity is materially harmed. Studies have shown that by First Nation members learning their ancestral language, suicide rates, substance abuse and school drop out rates all decrease considerably. Isn't this good for our society?

I don't think the issue is the amount of money spent, but rather how it is spent. I believe our role as Canadians is to support the Indigenous population to help the people achieve success.  It saddens me reading articles such as this talking about programs without showing their results. With so many success stories (Stats Can in October published that 59,000 First Nation people identified themselves as having reclaimed their ancestral language), why does our society want to cast shadows on the negative? The Heritage Canada money has very strictly adhered to guidelines about impact in performance and accountability. Why doesn't the author contact them for success stories?

I work with First Nations who self-fund language revitalization by creating immersion daycares, writing their own books, creating their own children’s programs. All digitized, all sharable. One First Nation is actually self-funding a project to partner with Microsoft to create an Ojibwe language translation tool requiring ten plus person years of their own First Nation's investment. The First Nations’ leaders cannot wait for anyone to fix this, so they are owning the issue themselves and paying for it themselves. They see a future of books, videos and educational material being created in the language given to them by their forefathers for future generations in order to keep their communities healthy, to build self-identity.  The Aboriginal Headstart program costing $59 million per year is for daycare, not language immersion, although language immersion could potentially be implemented.  I look at the dollar amount dedicated to language revitalization in this article and all I see is a few million dollars (the rest going to language archiving, content creation, etc. not revitalization). Divided by the Indigenous population of 2.8 million, the huge amount of money described is about $2 per Native. That's an investment equivalent to one Starbuck's coffee per year. I'm wondering what kind of impact $2 per year would have on changing my behaviour.

Lastly, I believe Chief Bellegarde did say what his ultimate goal is, but I believe his intent was to live in a world where his people had a great sense of self-identity. He's painting a dream, not striving for 62 labels. Help the Native communities with tools that support their wants and needs. Not the tools we think would work for us.